It’s been a frustrating month for investors in the silver market as we saw the commodity plunge 20% just as all of the metals bugs were busy hiking their year-end forecasts to $50.00/oz silver.

While many of these price targets could be achievable long-term for the metal, the last time you want to see these targets is after a parabolic rally, as it typically suggests that everyone is now wildly bullish on the metal. This was confirmed by the fact that silver went onto a sentiment sell signal in early August, and it remains on a sell signal as of Wednesday’s close.

Fortunately, the good news is that the silver to gold ratio remains on a bullish stance, and silver looks to be consolidating above its recent multi-year breakout, a completely normal reaction after a parabolic rally. Let’s take a closer look below:

One of the reasons I’ve been neutral to bearish on SLV since early August has been sentiment, as sentiment ultimately rules in the short-term when it comes to markets.

As we entered the month of August, we had several days with bullish sentiment sitting above 95% bulls, and we had the long-term moving average for bullish sentiment entering the danger zone (red box) above. While we remain in this danger zone as of Wednesday’s close, we are trending in the right direction, with silver sentiment dropping to 60% bulls last week. 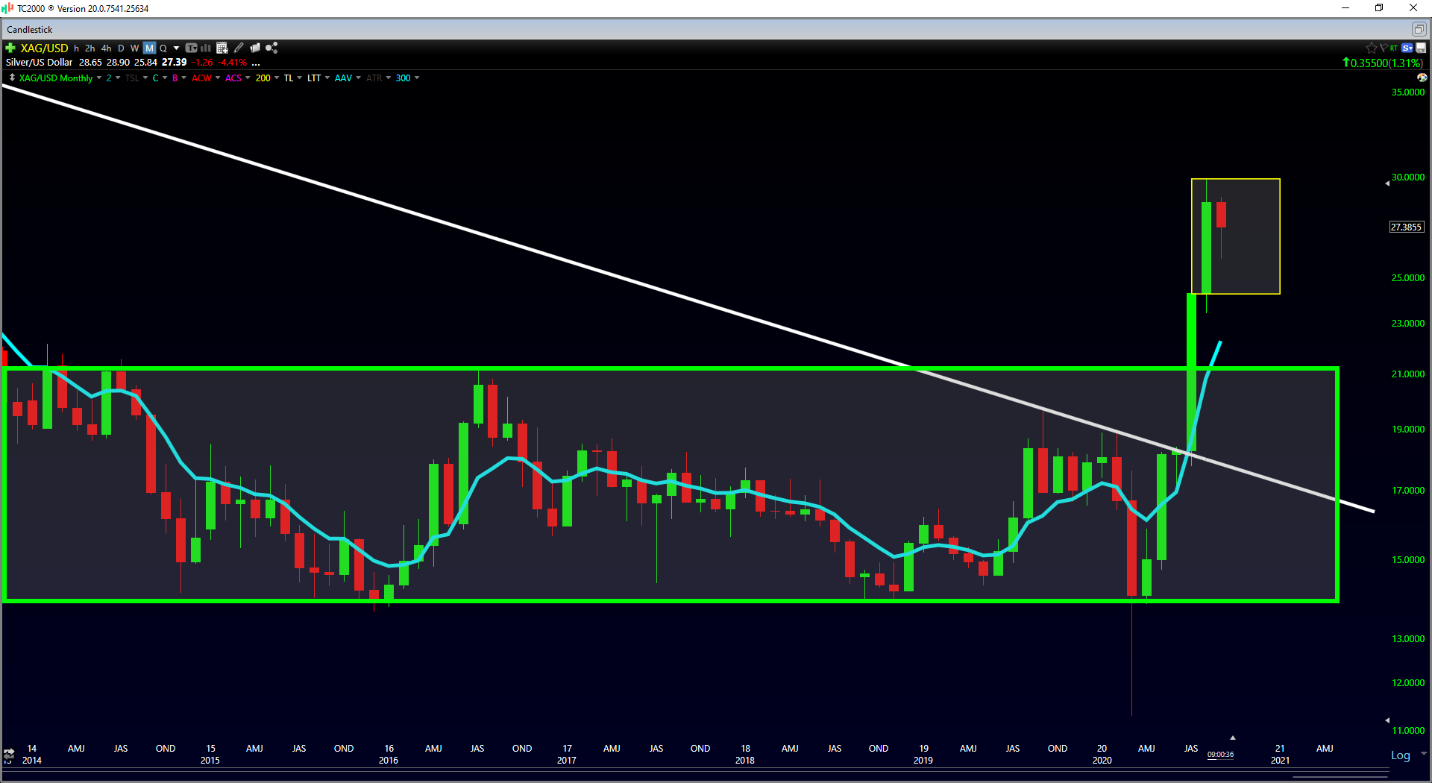 However, while sentiment continues to be a minor headwind here for silver, the monthly chart is the most bullish it’s looked since early 2011 with a massive multi-year breakout occurring in July. Generally, the stronger a breakout is, the more weight it holds, and the fact that silver exploded out of its base suggests a high probability that this is a real move.

The other piece of good news is that this correction has been very normal to date, with no retracement anywhere near the breakout level of $22.00/oz~ thus far. Based on the current correction, the most likely path looks to be a new base built between $23.00/oz – $29.00/oz, and a possible breakout later this year.

However, if the metal does break down, I would expect the breakout area near $22.00/oz to provide support. Therefore, regardless of how this correction shakes out, I remain bullish long-term as long as…