We’ve seen a strong start to April for precious metals, with the price of silver up over 3% to start the month and gold up more than 2% after a sharp decline in Q1. This recent strength in the price of silver to continue outperforming gold on an intermediate-term basis and sentiment has finally begun to cool off, with the long-term sentiment moving average dropping to 60% bulls from 79% in early February. While this reading is nowhere near a buy signal, it is a major step in the right direction, given that it’s dropped enough to take silver from a crowded trade to a more neutral trade. Let’s take a closer look below:

As shown in the chart below, silver came dangerously close to a short-term sell signal in early February, with the WallStreetBets crowd jumping on the trade. This enthusiasm sent bullish sentiment above 85% bulls for several days and pushed the long-term sentiment moving average to 79% bulls, just outside the danger zone. Fortunately, silver has pulled back over 20% from its February highs. This has allowed the sentiment moving average to drop 2000 basis points to 60%, with some of the higher January readings being rolled off. Even better, sentiment fell below 30% bulls last week, with the metal touching the $24.00/oz level, which suggested the first sign of fear on a short-term basis.

While sentiment readings are nowhere near a perfect indicator, they help dictate how far a market might be able to go in its current rally or decline. As of early February, the upside looked very limited short-term because when nearly everyone is bullish, it’s hard to find new buyers. So, this dip to 30% bulls short-term and 60% has reset sentiment at least partially and has given the metal room to rally to $29.00/oz to $32.00/oz if it can regain its upside momentum. In terms of the best ways to get leverage on the price of silver, GoGold Resources (GLGDF) looks like a solid bet on any dips below US$1.90.

If we check in on the silver/gold ratio, we’ve also seen an improvement here, with the ratio looking like it’s trying to make a new swing low at 0.15. Assuming this is the case, the ratio would remain above its monthly moving average and in bullish alignment. For those unfamiliar, silver and gold tend to perform better when silver is leading, so outperformance in silver is always encouraging. 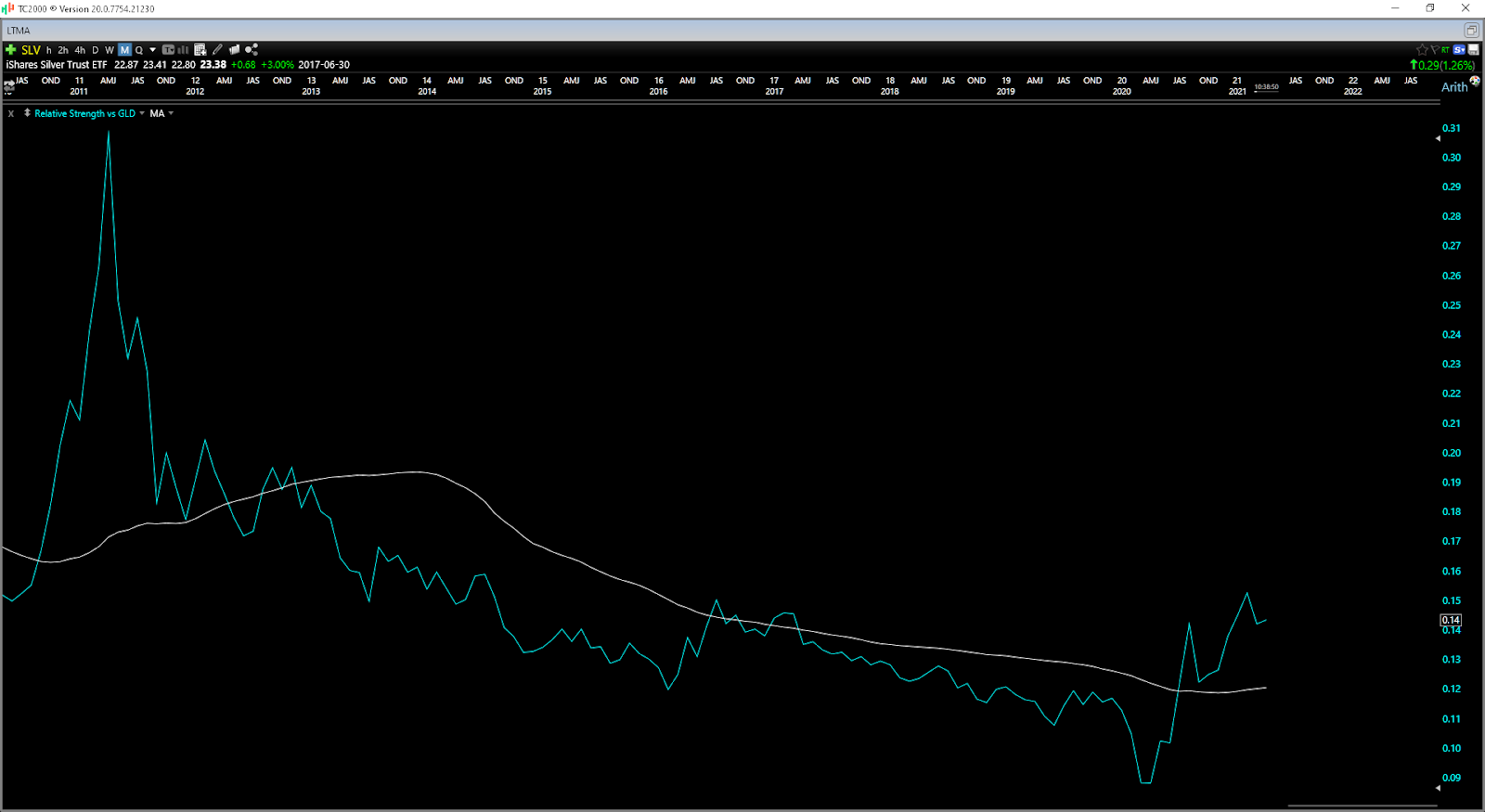 So, how’s the technical picture look? 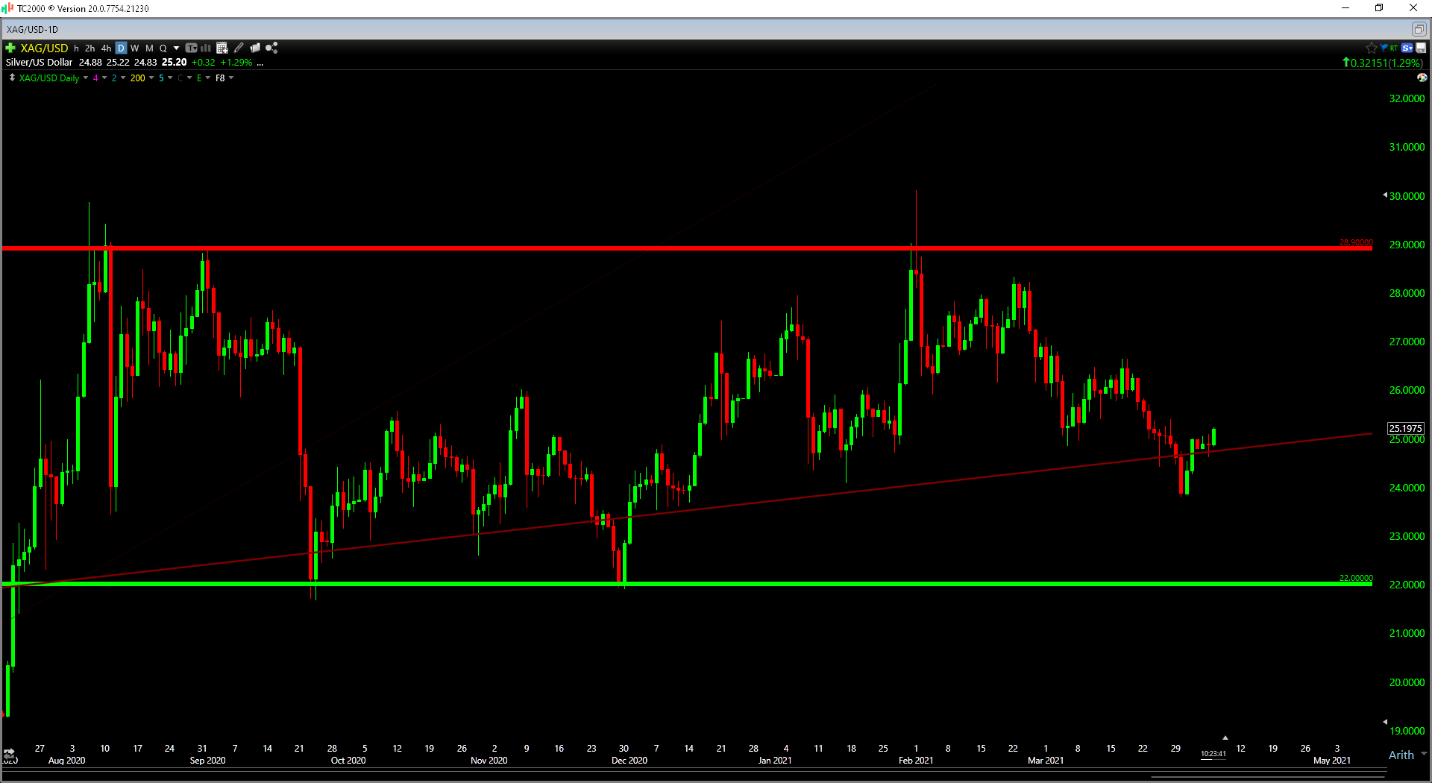 Currently, silver continues to trade in a wide range with support at $22.00/oz and resistance at $28.90/oz. Until the metal breaks out of this range, it’s hard to confirm short-term direction, but the multi-year breakout last would suggest giving the benefit of the doubt to the bulls. Besides, as long as that breakout level is defended, the long-term picture will remain bullish.

So, what’s the best course of action?

Given the wide and volatile range, I see the best course of action being to buy dips below $24.00/oz and trim positions above $28.75/oz. Obviously, it’s possible that silver could break out this year above $30.00/oz, but the metal may spend the year digesting last year’s 48% gain before heading to new highs in early 2022. So, for investors looking to add exposure, I see the metal as only a Hold here, and I would be looking to trim on any rallies above $28.75/oz.

When it comes to ways to get leverage on the price of silver, I believe GoGold Resources (GLGDF) looks like one of the best bets in the small-cap space, with the potential to prove up over 200 million silver-equivalent ounces at its Los Ricos District in Mexico. The company has a…