With the current situation suggestive of a Monty Hall problem, investors are clinging to the first, bullish door. But what if a different option is more likely?

The Monty Hall problem is a form of a probability puzzle, and what it shows is immensely unintuitive. Suppose you are on a game show, and you need to choose one of three doors. Behind one of them is a car and behind the others, goats. You pick a door, and then the host (who knows what’s behind them) opens one of the remaining doors, behind which there is a goat. The host now asks: “Do you want to change your door choice for the remaining doors?” So, what do you do?

It turns out that if you change the door, the probability of winning the car increases… two times! You have a two-thirds chance, instead of a one-third chance. Tremendously unintuitive, indeed, but what if the same is happening on the market now? With a bullish prospect representing the door of the first choice, and the technicals and fundamentals the host’s help, wouldn’t it be safer to switch the door to win eventually?

With investors stuck in their own version of the Monty Hall problem, guessing ‘what’s behind door No.1’ has market participants scrambling to find the bullish gateway. However, with doors two and three signalling a much more ominous outcome for gold, silver and mining stocks, the key to unlocking their future performance may already be hiding in plain sight.

Case in point: with the analogue from 2012 signalling a forthcoming rush for the exits, there are no fire escapes available for investors who overstay their welcome. And because those who cannot remember the past are condemned to repeat it, doubters are likely to lose more than just their pride.

While the most recent price action is best visible in the short-term charts, it is actually the HUI Index’s very long-term chart that provides the most important details. The crucial thing happened two weeks ago, and what we saw last week was simply a major confirmation. 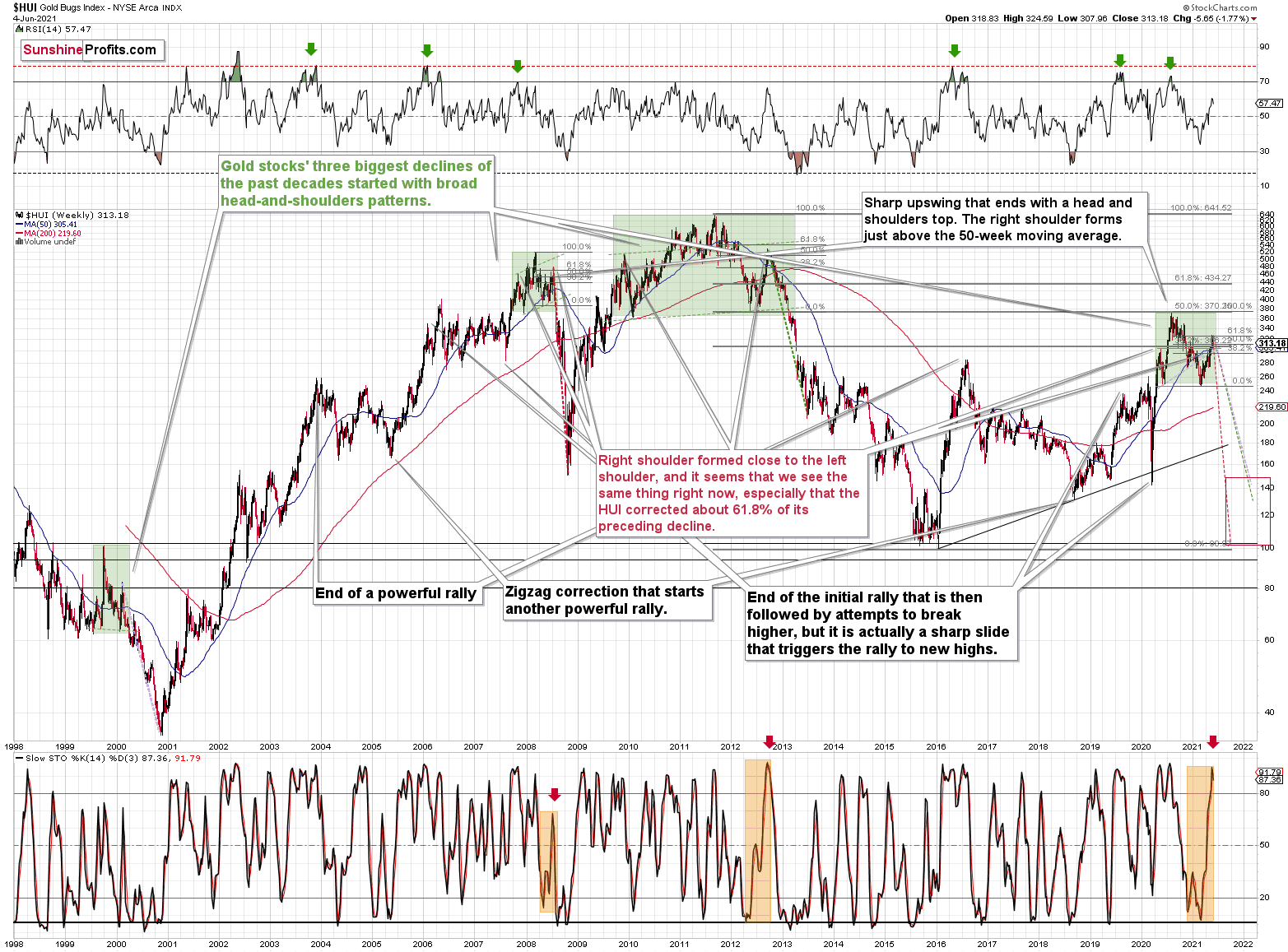 What happened two weeks ago was that gold rallied by almost $30 ($28.60) and at the same time, the HUI – a flagship proxy for gold stocks – declined by 1.37. In other words, gold stocks completely ignored gold’s gains.

That shows exceptional weakness on the weekly basis and is a very bearish sign for the following weeks. And it has important historical analogies.

Back in 2008, right before a huge slide, in late September and early October, gold was still moving to new intraday highs, but the HUI Index was ignoring that, and then it declined despite gold’s rally. However, it was also the case that the general stock market declined then. If stocks hadn’t declined back then so profoundly, gold stocks’ underperformance of gold would likely be present but more moderate. In fact, that’s exactly what happened in 2012.

The HUI Index topped on Sept. 21, 2012, and that was just the initial high in gold. At that time the S&P 500 was moving back and forth with lower highs – so a bit more bearish than the current back-and-forth movement in this stock index. What happened in the end? Gold moved to new highs and formed the final top (Oct. 5, 2012). It was when the S&P 500 almost (!) moved to new highs, and despite both, the HUI Index didn’t move to new highs.

The similarity to how the final counter-trend rally ended in 2012 (and to a smaller extent in 2008) ended is uncanny. The implications are very bearish for the following weeks, especially given that the gold price is following the analogy to 2008 and 2012 as well.

All the above is what we had already known last week. In that case, let’s move to last week’s confirmation. The thing is that the stochastic oscillator just flashed a clear sell signal. This is important on its own as these signals often preceded massive price declines. However, extremely bearish implications come from combining both: the sell signal and the analogy of 2008 and 2012. Therefore, we should consider the sell signal in the HUI-based stochastic oscillator as yet another sign serving as confirmation that the huge decline has just begun.

Thus, if history rhymes, as it tends to, the HUI Index will likely decline profoundly. How low could the gold stocks fall? If the similarity to the previous years continues, the HUI could find medium-term support in the 100-to-150 range. For context, high-end 2020 support implies a move back to 150, while low-end 2015 support implies a move back to 100. And yes, it could really happen, even though it seems unthinkable.

But which part of the mining stock sector is likely to decline the most? In my view, the junior mining stocks.

VanEck Vectors Junior Gold Miners ETF (NYSE:GDXJ) is underperforming GDX (NYSE:GDX) just as I’ve been expecting it to. Once one realizes that GDXJ is more correlated with the general stock market than GDX is, GDXJ should be showing strength here, and it isn’t. If stocks don’t decline, GDXJ is likely to underperform by just a bit, but when (not if) stocks slide, GDXJ is likely to plunge visibly more than GDX.

Expanding on that point, the GDXJ/GDX ratio has been declining since the beginning of the year, which is remarkable because the…